In an ideal world, every voting-aged individual would feel enthusiastic, secure, safe, and satisfied in the voting process. 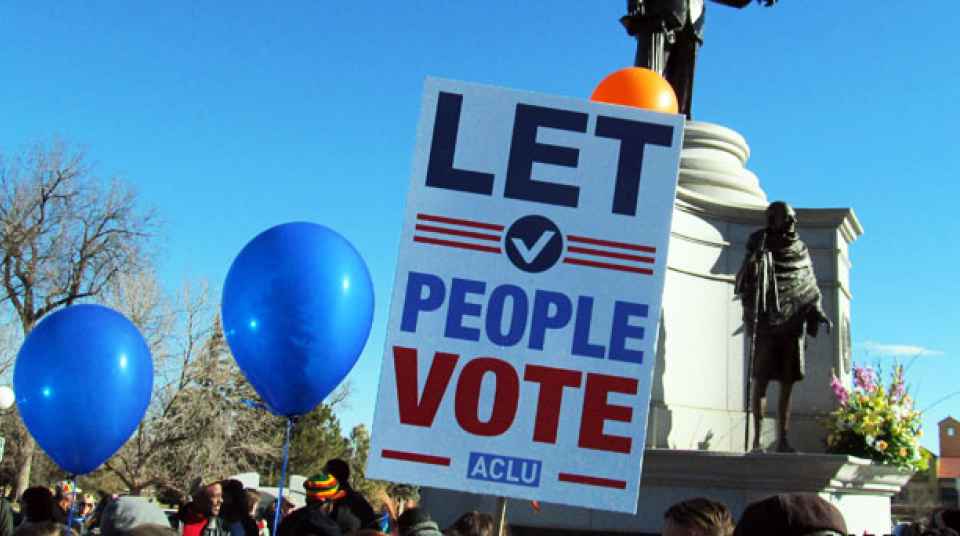 Voting rights are under attack nationwide as states pass voter suppression laws under the pretext of preventing voter fraud and safeguarding election integrity.
These include:

These laws lead to significant burdens for eligible voters trying to exercise their most fundamental constitutional right. Since 2008, states across the country have passed measures to make it harder for Americans—particularly black people, the elderly, students, and people with disabilities—to exercise their fundamental right to cast a ballot. These measures include cuts to early voting, voter ID laws, and purges of voter rolls. (Learn More)

On a Personal Level:

WE INVITE ALL AMERICANS TO JOIN THE FIGHT AGAINST VOTER SUPPRESSION

1. Register and vote in every election

The best way to counter massive amounts of outside money influencing election outcomes is not to take any election for granted — especially state and local elections.  So register. Then vote.

Ones that expand voting rights and fight back against lawmakers’ attempts to create gerrymandered districts.  In 2018, citizen-led initiatives restored the right to vote for felons in Florida and put a stop to gerrymandering in Michigan and three other states.

Find out from your local Board of Elections what their parameters are for cleaning up the voter rolls, (i.e., are they just removing people who have passed away, or purging people who haven’t voted in the last few elections).

4. Speak up when people talk about rampant voter fraud.

While some politicians have effectively pushed the lie that voter fraud endangers the integrity of our elections, the truth is that the percentage of votes found to be fraudulent comes out to .00002% (or 40 votes out of 197 million cast).

Do your homework before you vote for state or local judges. These are the people who will ultimately make decisions about who can vote, so find out where they stand on protecting voter rights. And let your US Senators know how you feel about federal judge nominees.

If you witness or experience voter intimidation when you go to vote, say something. Call the Election Protection Hotline: 866-OUR-VOTE, or the Latino Protect the Vote Hotline: 888-VE-Y-VOTA. And make sure to contact your Secretary of State and local, state, or federal representatives if you feel your access to the ballot is being impinged.

Give donations and volunteer for political candidates at the state and Congressional level who support voting rights and want to strengthen the 1965 Voting Rights Act. Or donate to groups that are on the frontlines of the voting rights fight.

With the news, social media, and television ads the platforms to disseminate misinformation are ever-widening.

Did you know that you can fact check political ads & statements from candidates? Visit www.snopes.com to obtain accurate information.

Snopes got its start in 1994, investigating urban legends, hoaxes, and folklore.

Founder David Mikkelson, later joined by his wife, was publishing online before most people were connected to the internet. As demand for reliable fact checks grew, so did Snopes. Now it’s the oldest and largest fact-checking site online, widely regarded by journalists, folklorists, and readers as an invaluable research companion.

For example, snopes wanted to answer the question “Did Sanders Propose Raising Taxes to 52% on Incomes over $29,000?”  They found the claim to be false.

Companies such as AARP and Business Insider are providing warning and tips on the rapidly spreading misinformation of political ads and posts on social media, particularly Facebook.

AARP warns that older individuals are particularly susceptible to being targeted and manipulated with false political social media posts. AARP’s Fraud Watch Network can help you spot and avoid scams. Sign up for free “watchdog alerts,” review our scam-tracking map, or call our toll-free fraud helpline at 877-908-3360 if you or a loved one suspect you’ve been a victim.

Business Insider states “Facebook is embroiled in yet another controversy, but this time it’s not about your data: It’s about foreign interference in American elections, and partisan politics, and freedom of speech.

It all stems from a relatively simple announcement Facebook made about how its advertising works: Facebook refuses to fact-check political ads that run on its platform.” (Read more here)

There are still policies that discourage or make it more difficult for many individuals to vote in elections.

Vote for Individuals that Prioritize These Voting Practices:

Getting Ahead of Discrimination

Addressing All Forms of Discrimination

Courts could potentially place an immediate hold on on discriminatory voting laws by focusing on present day and recent issues at the ballot box.

To ensure everyone’s right to vote, certain states and counties with repeated violations in the present or recent past are subject to extra review to break the pattern of discrimination.
Times are ever changing, but history can still speak to the future. The voting practices can be evaluated going back 15 years!
States, counties, and cities that have indication of repeated violation in this timeframe will have all potential voting changes evaluated prior to implementation.
Using an annual review that considers the most recent information, places that maintain fair voting practices can be removed from the list

Keeping an Eye on Potential Discrimination

– Any place in violation of VRA or Constitution